Temporary visas for foreign drivers may help solve the UK’s HGV crisis, but the truckers answering the call are coming from outside the EU[1], according to a new economic analysis by the world’s largest job site Indeed.

Indeed recorded a 307% spike in interest in UK-based HGV jobs from overseas drivers in the days following the government’s announcement that it will offer 5,000 temporary visas to foreign drivers keen to work here.

But the bulk of interest came from non-European drivers; enquiries from jobseekers based outside the EU soared by 627%.

Indeed’s data suggests drivers from India, the UAE, South Africa, Poland and Nigeria are keenest to answer the government’s call. 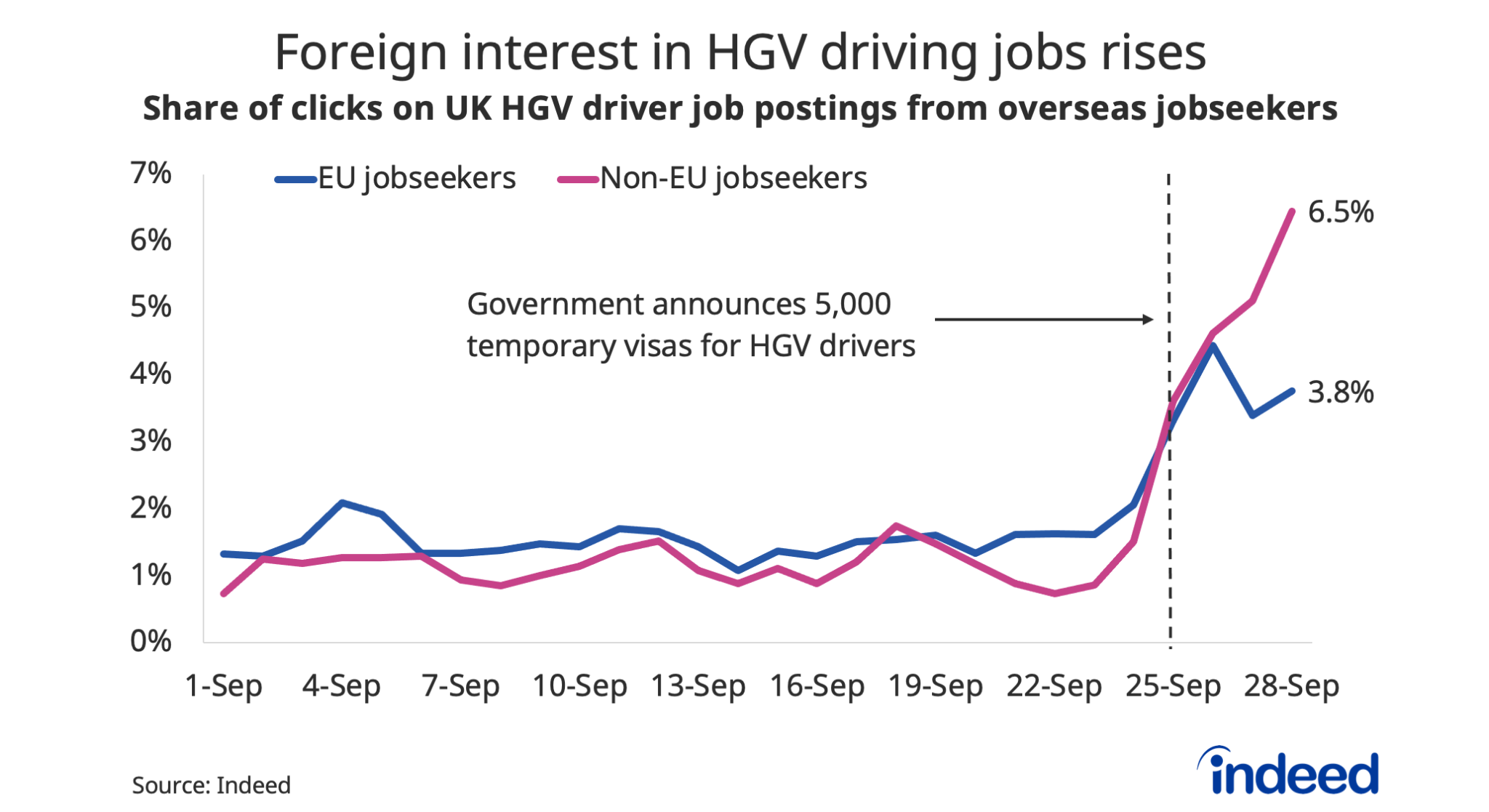 Two factors may explain the lower levels of interest from European drivers. One is Brexit; it is now no easier for an EU-based driver to get a UK job than it is for a non-EU candidate. The other is that many EU countries are grappling with their own shortages of HGV drivers.

With European haulage firms raising wages to lure qualified drivers from abroad, and EU citizens already able to work visa-free in other EU countries, for European truckers this is an easier option than relocating to the UK. By contrast non-EU citizens do not have the automatic right to work in the EU, so the UK’s emergency visa scheme is especially appealing to them.

While the chronic shortage of qualified HGV drivers has caused chaos in the UK, disrupting deliveries of fuel and food to supermarkets, demand for HGV drivers has actually grown faster in Spain and Italy than here.

Demand for HGV drivers is high across Europe 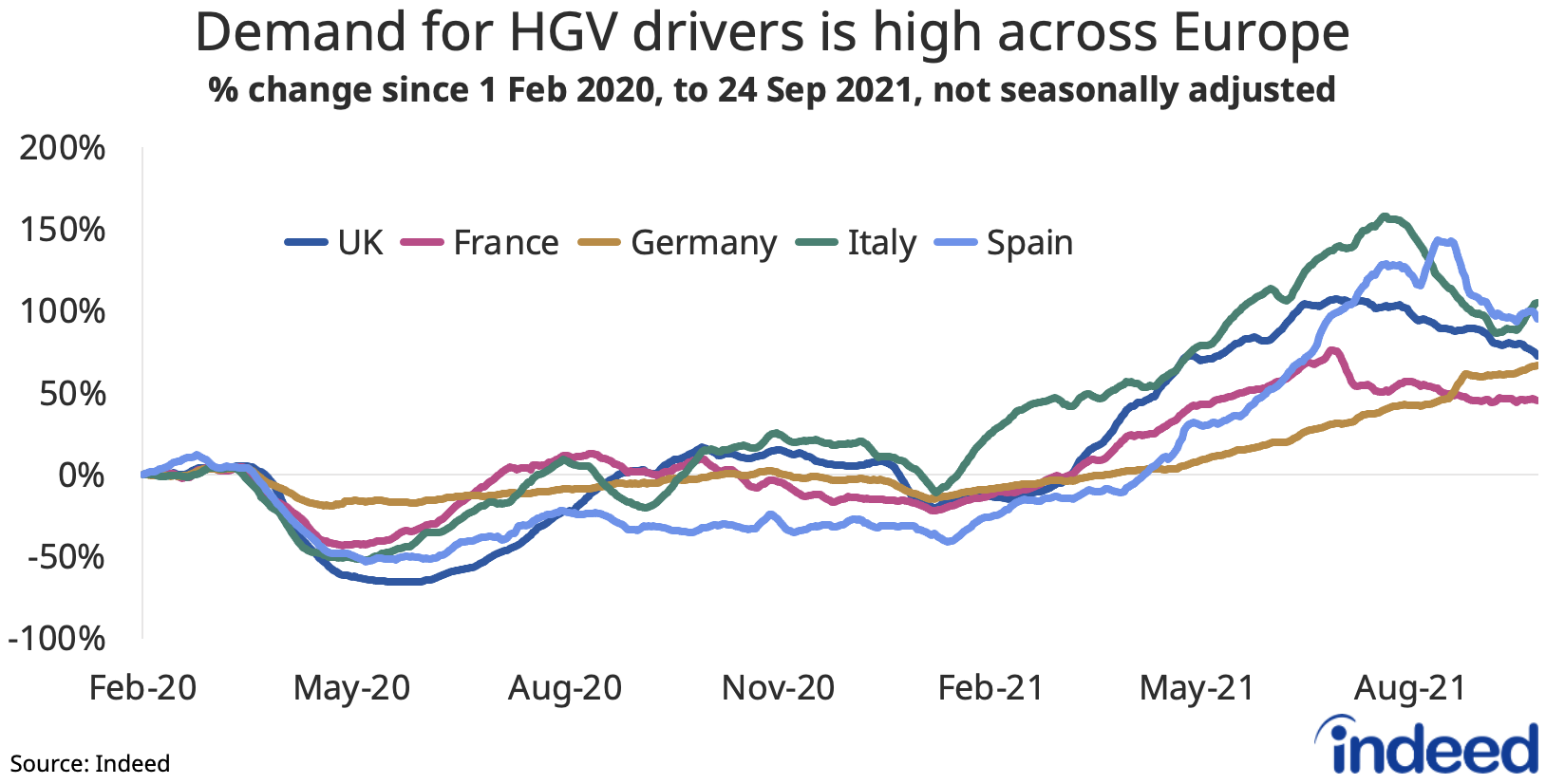 Demand for HGV drivers in the UK has risen by 73% from pre-pandemic levels in February 2020 to September 2021. This is surpassed by Italy where demand has risen by 105% and Spain, where it has risen by 95%.

Germany has seen a rise in demand similar to that of the UK, with German job postings for HGV drivers up 67%; postings have risen by 45% in France.

UK haulage firms are battling to attract candidates by raising pay and offering ‘golden hello’ sign-on bonuses. Between January and September 2021, the median hourly wage for HGV driver jobs advertised on Indeed increased 15% from £13.05 to £15.00, while the median annual salary advertised increased by 19% from £30,000 to £35,600[2].

The rise in HGV driver salaries since the start of 2021 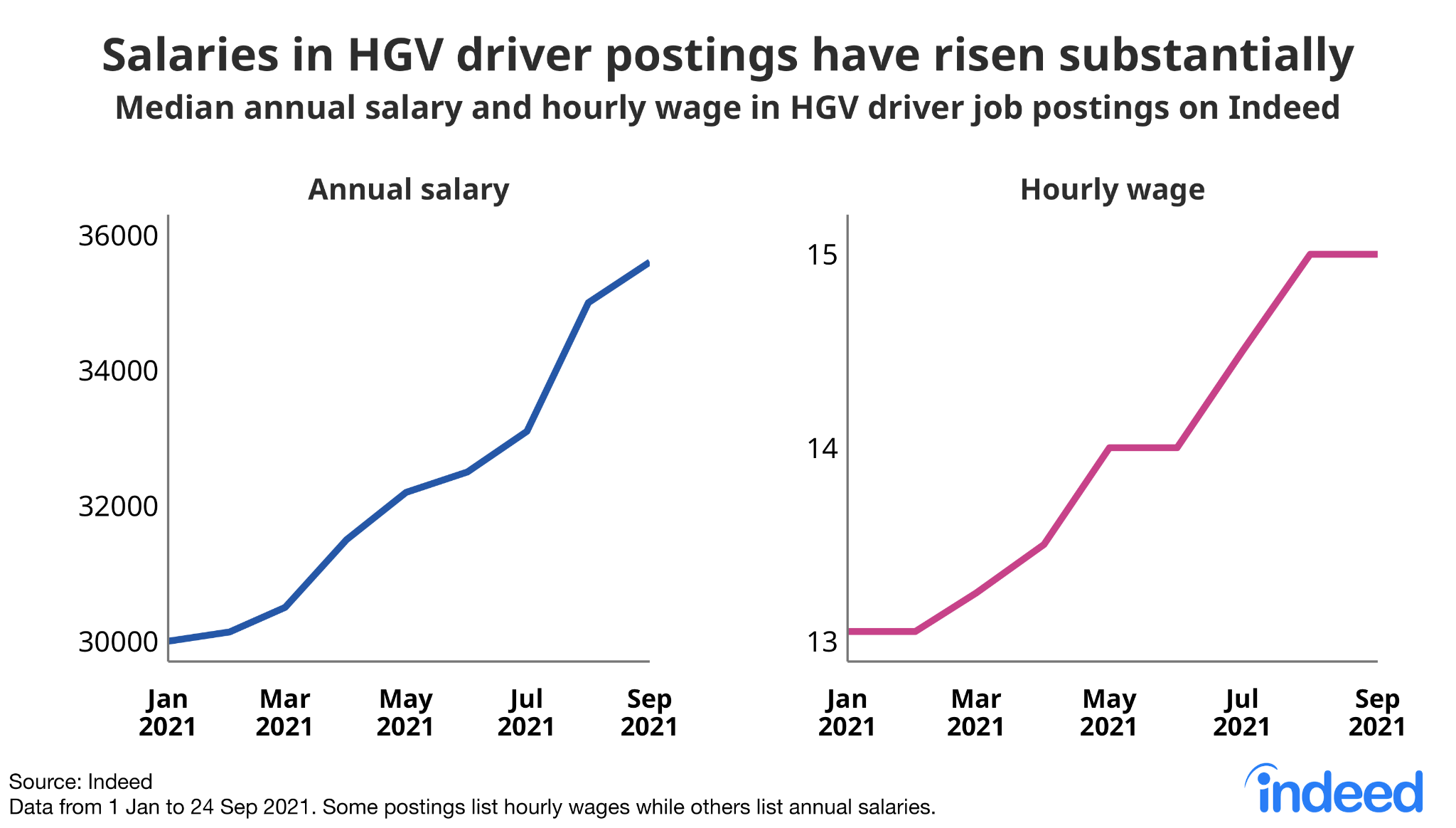 “Petrol shortages and the prospect of empty supermarket shelves have spurred the government into action, and all eyes have turned to our European neighbours to see if the offer of 5,000 temporary visas will tempt EU drivers to return to the UK for work.

“However, we might be looking in the wrong direction, as the fact that so many other European countries are wrestling with their own driver shortages means EU-based drivers may opt to stay close to home rather than move to post-Brexit Britain.

“Fortunately there has been a big spike in interest from drivers from outside the EU. For them, British HGV jobs are likely to be highly attractive due to the rapidly rising salaries and sign-on bonuses on offer, even if the visas will only apply for a three-month period.

“However the government’s visa strategy is unlikely to be a complete solution. Visas for 5,000 drivers may barely scratch the surface of what is needed, as some estimates put the shortage as high as 100,000.

“Meanwhile, non-EU drivers will be less likely to have the Driver CPC qualification that’s required to drive HGVs in the UK and EU. Getting one could eat into the time in which overseas drivers can drive in the UK, and this roadblock could blunt the effectiveness of the visa scheme.”

Cybersecurity risks could disrupt businesses on their return to the workplace, insurance expert warns

How to Prepare for Working Outdoors in Winter

Cybersecurity risks could disrupt businesses on their return to the workplace, insurance expert warns