At the beginning of 2020 pay rises fell to their lowest level in more than a year, and now employers tell us that they expect settlements to remain subdued through the months ahead, finds the latest research from pay analysts XpertHR.

Even before the extent of the coronavirus (COVID-19) outbreak was evident, employers were already being cautious about pay rises this year. Surveyed in January and February, employers in the private sector told us that they expect to make a median 2% pay award during 2020. 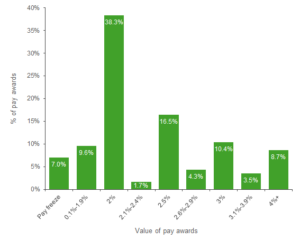 Key findings from our research include the following:

Our analysis finds that 72.3% of employee groups can expect to receive a pay rise in the year ahead. Pay freezes are still a reality for others, although only 5.4% are expected to see no increase in their salary at all. The outcome for the remainder is currently uncertain.

Employers continue to balance upward and downward pressures on their pay budgets. Inflation and aligning pay increases with the cost of living is the most commonly cited upward influence. Matching pay levels with others in the same industry, and staff recruitment and retention, are also among the upward pressures near the top of the list. The greatest downward pressures on pay awards over the year ahead include organisations’ ability to pay and their ability to increase prices of products and services. Uncertainty due to the impact of Brexit also continues to feature. It is safe to assume that the impact of coronavirus can now be added to this list.

Over the 12 months to the end of February 2020, the median pay award in the private sector is 2.5%, with the same figure recorded in the public sector.

“Current events across the globe can only serve to worsen what was already a fairly subdued picture of pay awards for the coming year. If pay awards do settle around the 2% mark throughout 2020, this will be the lowest level recorded by XpertHR since 2017.”

How should employers react to the third lockdown?

This Magazine is Published by Need To See IT

Submit your article for consideration