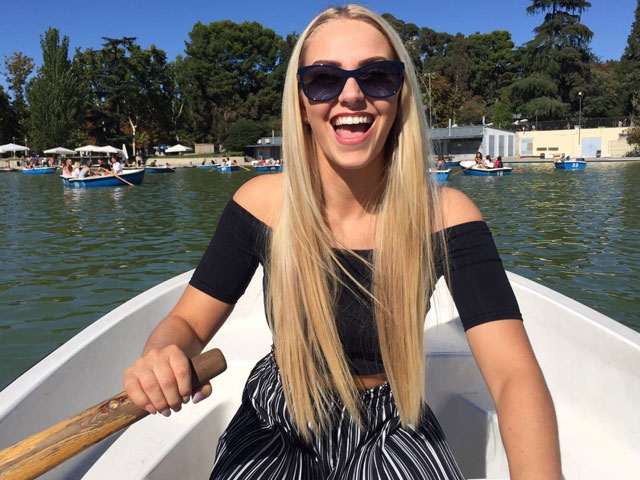 Nicola Priestley has ditched a high flying career in law to bounce around the world – after swapping her desk for a trampoline.

In a move which has seen her halve her working hours and double her income by becoming a Boogie Bounce instructor – Nicola couldn’t be happier.

For as long as she could remember, her ambition was to become a lawyer. However, Nicola, now 25, of Sheffield, South Yorkshire, quickly discovered that the reality didn’t quite match the dream…

Not only did she hate sitting in an office day in, day out – but the talented dancer also missed the joy, exhilaration and rush of ‘happy hormones’ that an active lifestyle had always given her. “I felt like I’d lost a part of myself,” she says.

The final straw came when she was refused time off for a Christmas trip to New York in 2015.

“It suddenly struck me that life was too short to be stuck at a desk sorting out boundary disputes,” she says. “There was a big world out there and I wanted to see it.”

After booking her flights she promptly handed in her resignation. “I felt like the weight of the world had been lifted from my shoulders,” she recalls.

Returning from her trip to the Big Apple, Nicola set to work creating her new career.

Two years on, she has halved her working hours, more than doubled her income, and has just returned from her eighth holiday in 12 months.

The secret? Boogie Bounce – an exercise class that involves bouncing to music on a mini trampoline. “I absolutely adore teaching people to bounce – and never think of it as work,” she says. “Because there is no stress on the body anyone can do it; it boosts mood and metabolism and transforms lives.”

Nicola’s love for dance and fitness came about almost by accident: “I was 13 when I enrolled in a weekly street dance class – so was quite a late starter.

“When my teacher took me to one side, and said I should do other classes, I didn’t take her seriously. In fact, I only took up ballet, tap and jazz dancing as she challenged me to give them a go.”

Nicola began helping out by teaching pupils at evenings and weekends. “But I was completely focused on my law studies. I was the first person in Hillsborough College to score 100 per cent in a criminal law A’level,” she adds, proudly.

At 18, Nicola secured a job in civil litigation which would enable her to study the Chartered Institute of Legal Executives course at night school. “I worked so hard and was so relieved to gain associate status but my heart just wasn’t in it. I remember thinking ‘something’s not right. I’m just not happy’.”

“Being turned down for holiday leave made me revalue my life. I realised I was happiest when I was both dancing and teaching others how to dance.”

After her New York trip, Nicola became a freelance dance teacher. “But I was on a meagre salary and really struggling financially,” she says. “I had to do something else – but what?”

While browsing Facebook Nicola stumbled across a video of a Boogie Bounce class – which involves exercising to music on mini trampolines with bespoke handles.

“It was the first rebounding class to launch in the UK more than 20 years ago – and looked amazing. I knew instinctively that this was what I was meant to do, and signed up for the next training course,” she says.

Qualifying and launching three Boogie Bounce classes across Sheffield gave Nicola the confidence to launch her own dance academy – and she now runs both companies simultaneously.

Best of all, she has an enviable work/life balance.

Since becoming a Boogie Bounce instructor 18 months ago (June 2016) she has clocked up a staggering TEN holidays.

Here’s how her holiday calendar adds up:

And on Christmas Day 2017 she jetted off to Thailand for a fortnight in the sun.

“I’ve never been better off – and happier,” she says. “In the village of Stockbridge where I live they call me the Boogie Bounce lady! The men say their wives couldn’t cope without me.

“My clients are amazing and feel like family to me. The best thing is being my own boss and having control over my own time and working hours. I have three shadow instructors who step in if I want a day or weekend off.”

Nicola now has a starring role with Boogie Bounce featuring in their promotional videos. She also plans to become a Master Trainer – running courses for instructors all over the world.

And Nicola’s message to anyone out there envious of her lifestyle? “You can do it too,” she urges. “Don’t settle for a job you think you ought to do – do what really makes you happy. It’s true what they say; find a job you love and you’ll never work a day in your life.”

For information on Boogie Bounce and becoming an instructor log onto www.boogiebounce.com

Older Generations Anxious About Health Risks of Returning to Work

Get rid of stereotyped terminology from the workplace to help male mental health.

Government training and skills funding schemes ‘a minefield’ for businesses